CBI Agent Kevin Koback: Have you seen this? Kessinger: Yeah I saw that.

The Colorado Bureau of Investigation, and those at the center of the Watts case, have been actively reading these blogs. Here’s how we know.

Between 09:45 and 10:09 on the morning of August 29th, 2018, a Wednesday, Nichol Kessinger sends Colorado Bureau of Investigation Agent Kevin Koback the following text:

This is in reference to news circulating in the media about Watts possibly being involved with another man [Trent Bolte], and which I was covered in a post the day prior on Shakedown.

Was Chris Watts having an affair with another man? UPDATED [August 28th, 2018]

Koback answers that yes, he is aware of the news, and asks Kessinger if Watts ever mentioned anything “about that?”

KESSINGER: Not at all. I don’t know if I believe this yet but he fooled me into thinking he was a much different person than he is, so anything is possible.

As an afterthought, Kessinger added that she might have some reinforcing information.

KESSINGER: But I do have some dates for things he said that I think [are] in line with some things that other man [Trent Bolte] claimed. I already had them on my list to talk to you about.

Koback answers with a single word. 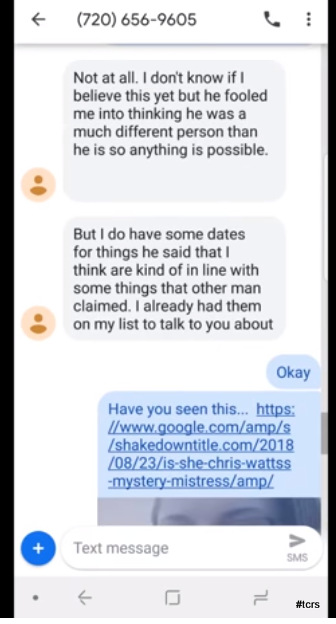 And then Koback sends Kessinger a follow-up question with a link to a blog post I authored on Shakedown, dated August 23rd, 2018. This link:

I posted that blog two days after Watts appeared in court for the second time, based on information presented [and later removed/redacted] from the Warrantless Arrest Affidavit.

Since the affidavit explicitly mentioned Watts was actively having an affair with a co-worker, it didn’t take a Rocket Scientist to figure out who she was. All one had to do was go through the list of female names on the affidavit, exclude those involved in law enforcement, and cross-reference those affiliated with the oil industry. More likely than not the likely candidate would be reasonably attractive and probably, though not necessarily, close to Watts’ age or slightly younger.

There was also another compelling reason why it probably was Kessinger. Because there was almost no evidence of her online. By as early as August 23rd, Kessinger had scrubbed virtually all traces of herself online, but not everything. This photo, for example, came up.

Google cache still had a reference to Kessinger working for Halliburton, a company associated with the oil industry.

And with a little digging, it turned out Kessinger’s father lived in Arvada and was also affiliated with the oil industry.

Arvada, incidentally, is where Kessinger and her father [and her dog] had their very first interview with the FBI at around midday on August 15th, 2018.  It was the same day Watts failed his polygraph and by the end of it, he’s partially confessed to the crime.

Kessinger’s response to Koback’s text asking her, “Have you seen this?” and the link to the Shakedown post Is SHE Chris Watts’s Mystery Mistress? was yeah, she had seen it.

KESSINGER: Yeah I saw that. Those people are grasping at straws. That picture is very very old and they don’t have my last few employers or my correct address. Or even my last few addresses for that matter. I’m really doing my best to stay under the radar as long as possible. Do they release more information about his case at his hearing on November 19?

But “those people” weren’t grasping at straws. It turned out it was Kessinger all along, and while the media only disclosed her identity in an “exclusive” published by the Denver Post on November 16, three days before the final sentencing hearing, the real scoop had been published by me almost three months earlier, as early as August 23rd, just ten days after the incident.

In late August, Kessinger was right about one thing. People were grasping at straws because tight control was being managed around the information in this case. Some of the less intuitive argued in the months that followed that Kessinger wasn’t necessarily the mystery mistress, because there wasn’t absolute proof that she worked at Anadarko.

The media remained strangely silent on the matter while going crazy about Trent Bolte as well as another dubious mistress Watts supposedly met on Tinder. In hindsight, both of these charlatans appeared to be either random attempts by individuals to hog the limelight, or someone was purposefully and strategically trying to misdirect attention and speculation away from Kessinger [and Anadarko] in the run up to the trial in November. 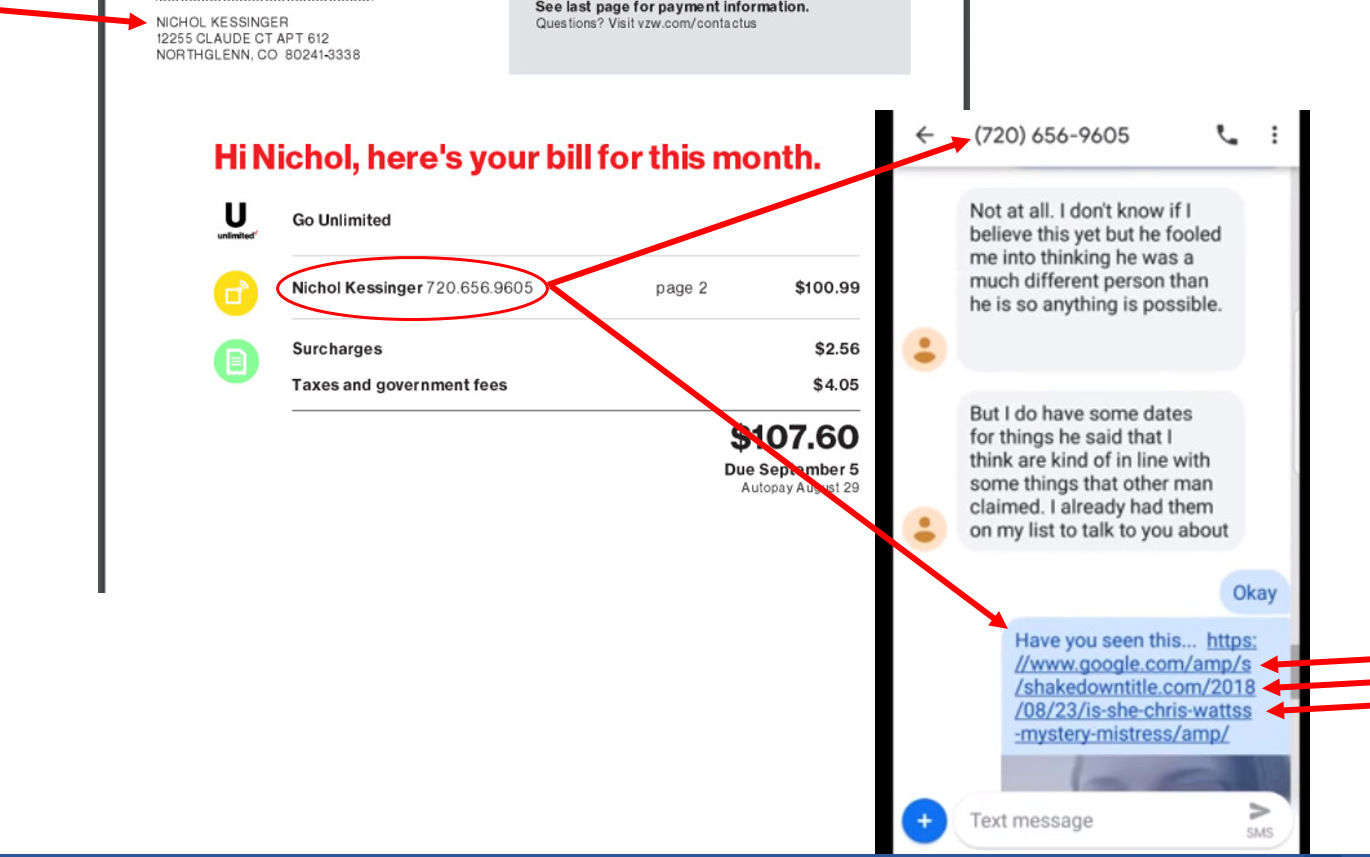